Alessandro Venturi, who works at the La Griffe Hotel, was named the 2018 Beluga Vodka Competition winner, beating rivals from all over Europe and America.

Can you tell me a few sentences about how you succeeded in becoming a world champion?

It was very hard of course. I had an inspiration for the first challenge in Italy from a friend of mine who was on a trip to Moscow and told me about a local product called hrenovuha so I decided to make a Martini with it and it turned out great.

For the world challenge, however, we were prohibited to bring anything except out bartending tools since they told us we were going to be informed about the task the day before the challenge. It was really scary and I had no idea what was going on. The first day was relaxing but the next one we got blindfolded and had to pick one flavour.

I got Peru balsam which I knew nothing about at that time and the task was to replicate the flavour in a drink. Since the flavour I got was barely edible, the challenge was very hard. In the end, I decided to tell a story about a tree from three different countries; Sao Salvador where Peru balsam originates from, Italy and Russia, since I was using Beluga vodka.

I made a drink with a few ingredients including Beluga hunting mix, chocolate and black olives; all the aromas that reminded me of Peru balsam, as well as a bit of vanilla. I added Vermouth, Beluga and decorated the drink with some local dry flowers. 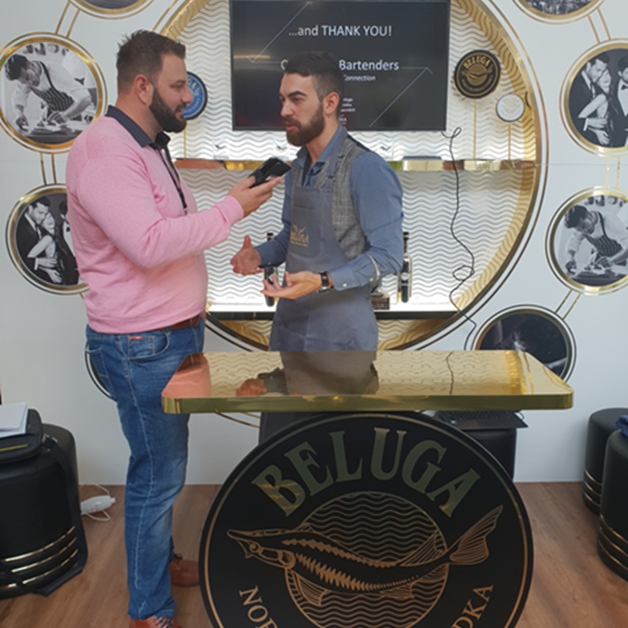 You currently work in Italy, right?

Yes, in Rome. I work for the 5 star Hotel named La Griffe. It contains a couple of rooftops, one of which is a classic bar and one is a tiki bar. We are working on improving hotel market in Rome actually.

Can you tell me what a good bar is from your perspective?

A good cocktail bar? I don’t know. I like hotel bars because they are really classy and clean and the atmosphere is nice. If you want to have a good conversation you should always go to a hotel bar.

Which cocktail bars could you recommend in Italy?

I really like Hotel de Russie , they have a very nice cocktail bar inside; Dom Hotel as well. We have a great cocktail bar too.

What is your advice for young bartenders who wish to progress in this profession?

This might sound like a cliché but they should follow their hearts. That’s a phrase we all hear from an early age but never really think about.  If somebody you trust tells you to follow your heart and you like the profession you should listen to him and not give up.

You should push yourself to learn. We all have a lot to learn from one another and we all have something to teach others.

In the end, could you tell me what your favourite cocktail is?

Maybe Daiquiri at the moment. You know, less is more.

Thank you very much for the interview!